The origins of Brazilian Jiu Jitsu 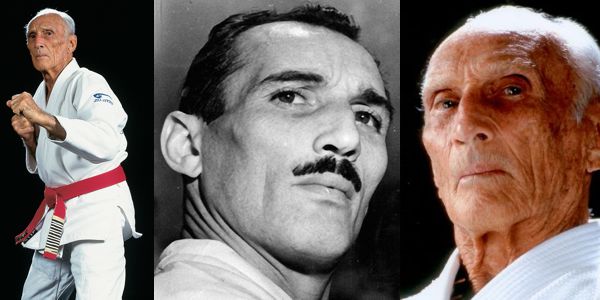 If you are looking on the internet you will find many articles on the history of Brazilian Jiu Jitsu . And often does no telling exactly the same thing.

Of course I am not a historian of Martial Arts, but with some practice (and being passionate about their history) I would still like to make my contribution.

Let’s start with the term Jiu Jitsu. You should know that at the base it does not designate a martial art itself. The word Jujutsu (Ju = Flexibility) and (Jutsu = Art) designated in fact unarmed combat techniques taught by the Japanese school (Ryu).

At the beginning of the 20th century and the modernization of the army, fighting techniques coming from different schools (Ryu) were collected. At this time, Judo (from Kito-ryu school) and Aikido (from Daito-ryu  school) make their appearance and later also Brasilian Jiu Jitsu (born in the evolution of a variant of judo Kosen, itself coming from Fusen-ryu school), but we re-discussed about it later.

Now that we know a bit more about Jiu Jitsu, go directly to “how” it happened in Brazil.

Well, it’s Mitsuyo Maeda between 1907 and 1920 that began the history of Brazilian Jiu Jitsu by bringing with him the Kodokan Judo. Arriving in Brazil he met Gastão Gracie who helped him settle in this new country. In gratitude, Mitsuyo taught the son of Gastão “Carlos Gracie” who in turn taught his brothers. It is at this point that Carlos Gracie started to modify the techniques he had learned to adapt to the Brazilian “sauce”. The Gracie Jiu-Jitsu came to be introduced.

In 1916, Luis França began training in judo/jiu-jitsu under Soshihiro Satake at his school Atletico Clube Rio Negro in the city of Manaus. França would remain in Manaus for a year before moving to the city of Belem.[1]

It was in Belem that França would begin training under Mitsuyo Maeda at the same time as Carlos Gracie, Donato Pires, Jacinto Ferro, and many others.[2] After his time with Maeda, França moved to Sao Paulo where he continued his training under Geo Omori[1] (who would later draw against Carlos Gracie in a grappling match).

Oswaldo Fadda was born in Bento Ribeiro, a suburb in the north of Rio de Janeiro to a family of Italian immigrants. At the age of seventeen, while in the Brazilian Marines, he began to study jiu jitsu under Luiz França and a black belt under Mitsuyo Maeda.

At the age of 16 Helio Gracie (who has had advised to practice due to his poor health) replaced Carlos during a course, using what he had memorized. And, he start to make further modification beacause its small size and low weight. This is the real beginning for Brazilian Jiu Jitsu.

Helio faced many opponents to prove the superiority of his martial art. In 1951 he face Yukio Kato (5th degree Judo black belt) and won the match. Later in October 1951 (one month after beating Kato) Helio face : Masahiko Kimura (the largest judo champion from Japan).

Coming into the match, Kimura indicated that he would knock his opponent out with a throw, and that if Gracie were to last more than three minutes he should consider himself the winner.

Simply put, Kimura dominated the match from a throwing perspective, continually slamming Gracie into what was apparently a somewhat soft mat. Since these moves did not stop Gracie as he thought they might, Kimura then began looking for submissions. After over 12 minutes had gone by and Gracie had been rendered unconscious by a choke but somehow persevered, Kimura sunk in a reverse ude-garami (arm entanglement, a shoulderlock). Gracie was so proud, so tough, that he refused to submit, having his arm broken instead. Eventually, his corner threw in the towel, and Kimura was rightfully given the win.

Judo won out here. But in the process, Gracie and Brazilian Jiu Jitsu was certainly gained some respect.

More recently, the Brazilian Jiu Jitsu in fact about him thanks to the UFC created by Rorion Gracie and Art Davie in 1993. The goal was to find the best fighter in the world, all weights and all styles. This is Royce Gracie who won the UFC 1, UFC 2 and UFC 4 that will literally “explode” the practice of Brazilian Jiu Jitsu.

Today Academies Brazilian jiu-jitsu were created everywhere, every member of the Gracie family running his own academy (or almost), even if the number of practitioners still limited in Europe.

Update from Reddit, a very good article, much more comprehensive than mine! if you want going more deeper !

what about the Mitsuyo Maeda > Luis França > Oswaldo Fadda lineage everyone clearly seems to forget.

lesly
Author
Reply to  The Count

Yep you right, França training under Mitsuyo Maeda at the same time as Carlos Gracie, Donato Pires, Jacinto Ferro, and many others. I choose to focus on Gracie story because I think they are truly the ones who popularized the jiu jitsu. But I going to annotate my article ! Thanks for your comment !

Maybe yes, but it is not intentional. As I said earlier that we appreciate them or not, they are still the ones who are popularized the sport.